Joshua has an M.A. in Education from Concordia University, St. Paul and an M.A. in Adlerian Counseling and Psychotherapy from Adler Graduate School. Joshua currently teaches Psychology at Hennepin Technical College. Before switching to higher education in 2010, he led child and youth development programs for school districts, camping programs, and faith-based organizations. He volunteers as the Scoutmaster for his sons' Scout Troop and enjoys family life, fishing, the outdoors, and dogs, archery, and XCskiing.

Do children need praise, or is it counterproductive?

This question was asked on a Quora forum that I subscribe to. Since this is an area where I’ve done quite a bit of literature review I decided to answer.

It’s VERY important to differentiate between “praise” and encouragement/positive recognition. At first this sounds kind of like a silly thing to gripe about, but I’ve come to believe it is true. I’ve also seen it work like magic with my own boys. Alfred Adler taught this years ago, and recent research by Carol Dweck Ph.D. (Stanford) has proven it again. Praise is indeed counterproductive. Encouragement, on the other hand, is essential. I’ll tell you the reasoning behind it, and you can make up your own mind.

For those who care, I’m an Adlerian psychologist and use Rudolf Dreikurs’ child guidance work as a foundation. Dreikurs taught, “A child needs encouragement like a plant needs water.” In other words, encouragement is essential. Children may not die without encouragement, but they certainly wither.

However, praise can be counterproductive, because kids become approval junkies. They do stuff to get the buzz from the praise rather than for the intrinsic motivation of doing something well and being proud of themselves for their effort. Additionally, if they DON’T get praised for something, they think they didn’t do a good job and even that they aren’t “good enough.” Children can feel this way even if they put out really good effort, made improvement, or did something really well. By praising in the wrong way, we can actually sabotage children’s ability to ever feel truly good about themselves. This is because they constantly crave more and better praise from others. In the end, they can become emotionally fragile, codependent, and “people pleasers.”

So let’s talk about how incredibly powerful encouragement and positive recognition are and how they differ from praise. I’m going to use some resources from Positive Discipline to demonstrate this. Here’s the source: Encouragement vs Praise.

Encouragement helps children to reflect on their achievements and efforts. Sometimes kids don’t realize how meaningful and important something they did was. Sometimes they don’t realize the great effort and good things they did. When this is the case, we can help them realize it with encouragement. Additionally, when they do know they did something well, encouragement helps them think about it in a way that brings it in deep and cements the power of it. Here’s a useful resource: Praise vs. Encouragement PDF

Here are some examples:

Praise: “I’m so proud of you. Here’s your reward.”

Encouragement: “You worked hard. You must be so proud of yourself.”

Praise: “You are such a good girl.”

Encouragement: “Thanks for helping. It made this go much better. I truly appreciate it.”

[Shared with the parents of our Cub Scout pack at our den orientation meeting.]

Part of the Cub Scout program is to have a flag ceremony and recite the Pledge of Allegiance at den and pack meetings. In light of recent events, discussions, and peaceful protests, I thought I’d share a bit of my personal reflection so you could know where your Cubmaster is coming from.

The first time I led the Pedge of Allegiance at a Cub Scout meeting, I had an odd feeling. I had to think for a while about where that feeling came from. Why would I feel strange? After all, I had grown up reciting the Pledge of Allegiance every day in school. I’d said it so many times that I didn’t even need to think about the words.

So I took some time to really think about the text of the Pledge. What stood out to me the most were the last three words: Liberty and justice for all. To me, that is the heart of the Pledge of Allegiance, and there was no doubt in my mind that I believed in that. Of the five words in that phrase, the one that is the most important to me is the last one: All.

However, I realized that the odd feeling I had when I led the Pledge of Allegiance did not come from whether or not I believed in it. It came from the fact that I was leading a group of wonderful, impressionable boys to recite a script that started with the words: “I pledge allegiance.”

Throughout history sincere, eager-to-please-and-follow boys have been inspired and sometimes indoctrinated to pledge allegiance. They have pledged to many different people, organizations, creeds, and governments. Sometimes the purpose was to benefit the boys, guide their energy, and help them grow. Other times, the purpose was to control, exploit, and profit.

As a father and Cubmaster, it is my mission to, at all times, be working for the positive development of our children. I encourage each adult to talk with your scout(s) about what the ideals of “liberty and justice for all” mean to you, your family, and our country. How do we live that out? How do we change when we find that we are not living it out? Then, when we recite the Pledge of Allegiance, it can be a reminder to recommit to our highest ideals, both individually and as a nation. 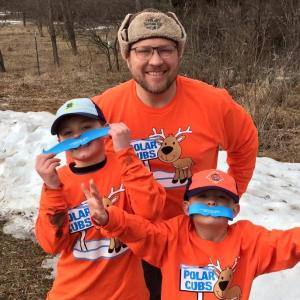 Here’s a link a PDF of the slides from tonight’s presentation on boys and brains at the Northwest District (Do Your Best) roundtable. As always, feel free to contact me if you have questions.

I was driving back from a family weekend in Iowa and had some thoughts about the Incredible Hulk. He’s always been one of my favorite superheroes, not because of his uncontested physical power, but rather because of his emotional intelligence. What? You might say. How can The Hulk, a rage fueled master of destruction be a model of emotional intelligence? Here’s what I think.

There is a decisive scene in one of the Avengers movies when Mark Ruffalo as Bruce Banner says, “That’s my secret, Cap. I’m always angry.” He then turns into Hulk and tips the balance in favor of civilization.

All superheroes are models of different aspects of the human condition. In the case of The Hulk, Banner starts out with significant childhood trauma and exposure to experimental technology that makes him vulnerable to emotional/biochemical influences. Can anyone identify with that on any level? The beauty is that The Hulk learns to control and manage his explosive power.

So, as I was driving, I wondered if I could figure out a good acronym for H. U. L. K. that would serve as a reminder for me (and maybe others) when my temper starts to take over. Here’s my favorite idea. Let me know if you have others.

This one is my favorite because they are one-syllabus words that can come to mind quickly when thinking of HULK.

“Hold Up” makes me remember to pause and take a breath.

“Laugh” reminds me to smile and chuckle at my situation, which is ipso facto stress relieving.

“Kid” serves a dual purpose. For me, it can remind me that kids are kids (if I’m getting frustrated at my boys) and they aren’t supposed to be perfect yet (or ever). This could also be helpful for children or youth who are putting too much pressure on themselves.

The other application of “kid” is to remember humor. Of course, the word “kid” can also mean to joke. There is humor in everything we go through, and often it’s just downright funny to realize how seriously we take situations.

So, I think it can be helpful for me to Hold Up and Laugh Kid when I start to feel angry and frustrated by what’s going on. Maybe it will be for you too.

Here’s the inspirational piece that I shared at the last roundtable as a parent recruitment tool. When it came time for our pack meeting, I actually ended using it as the Cubmaster Moment at the end. I didn’t use the powerpoint slide show in the meeting this time, but rather read through the script/slides and just let the audience focus on the yardstick (which I pre-scored) as we snapped off the pieces. Pre-score the yardstick at 3 inches, 5.5 inches, 9 inches, and 11 inches. Snap off the sections after slide 7, twice during slide 9, and after slide 10 so you’re left with 2 inches. You can download the whole Powerpoint and put your own Pack number etc. in it at the bottom of the pictures. This is an old, traditional tool that has been used by many organizations. The version I have was originally adapted from Bryan on Scouting, but it didn’t start there. 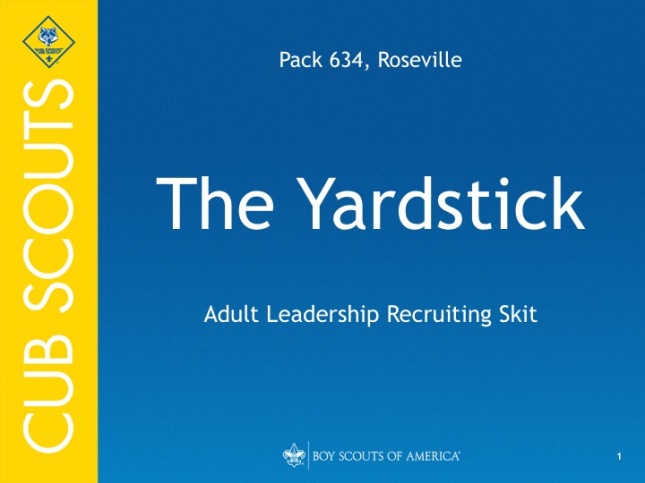 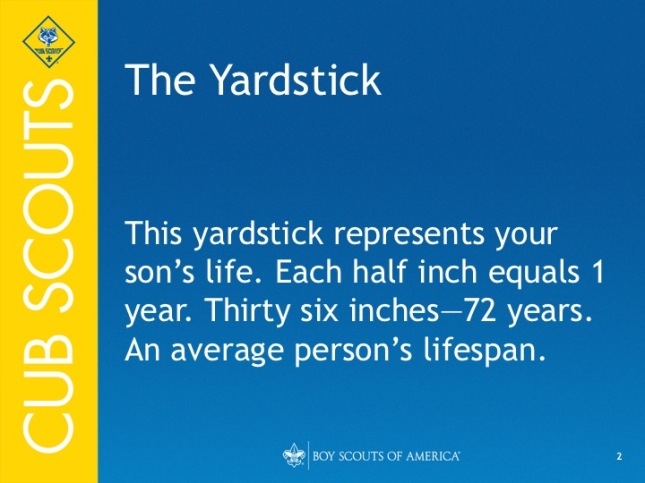 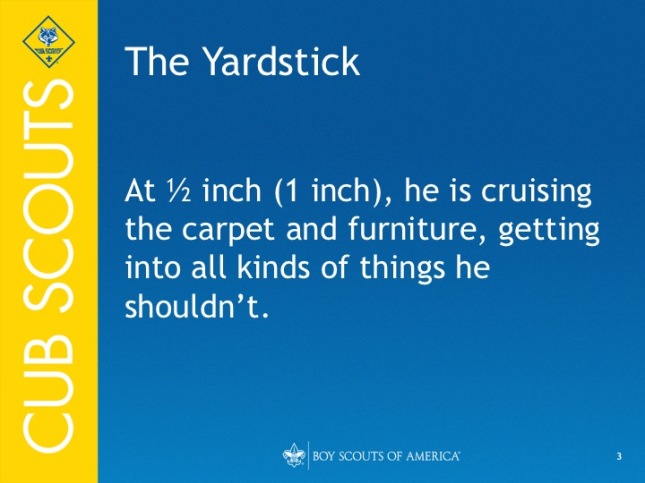 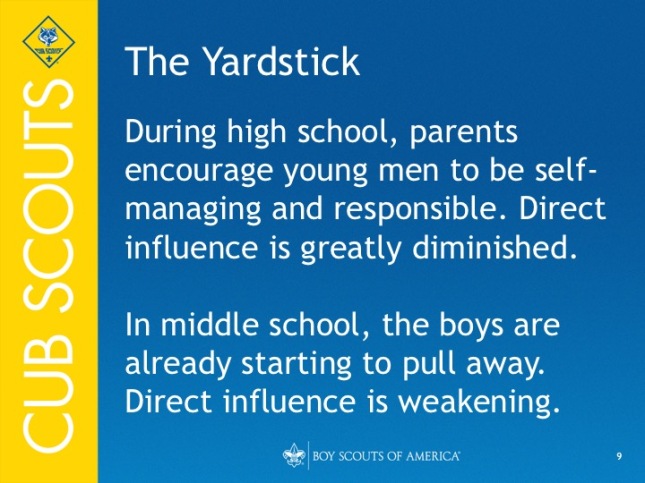 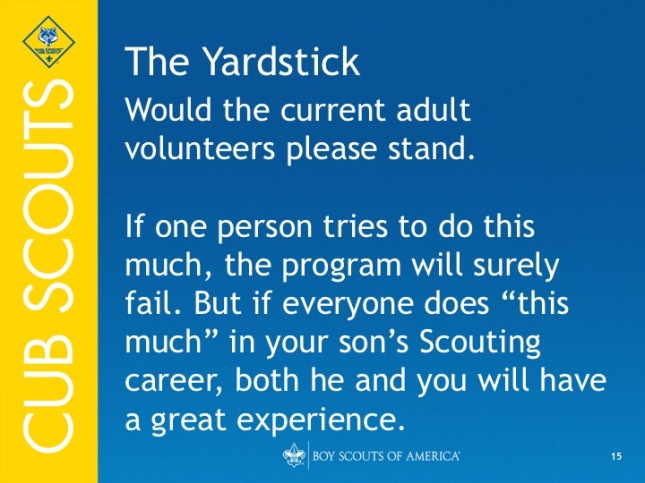